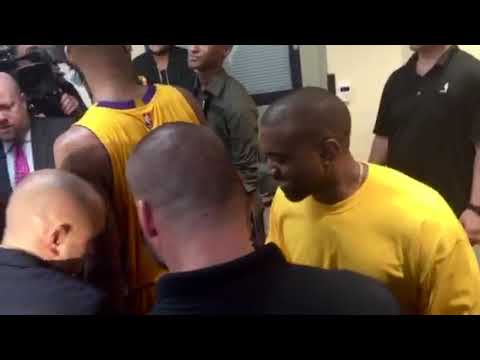 I had the privilege to cover Kobe Bryant’s last game as press for NBC Sports Radio. In this rare clip that I recorded, you see the excitement in Kobe’s face when him and Kanye West greet one another after his 60 point game. Also, Kobe takes the time to shake Lamar Odom’s kids hands. He looks at Lamar and Lamar’s kids and says how unbelievable it is to see them all. Kobe’s attention goes back to Kanye West and Yee gifts Kobe the I feel like Kobe long sleeve T-Shirt. This all took place right before Kobe’s post interview with the media. I didn’t release this video till now because I wanted the fans to see how happy Kobe Bryant was. It almost felt like he won a championship. 20 years and I got to close that chapter with him. Walking living legend man I feel like Kobe. His legacy will live on and the marathon will continue.